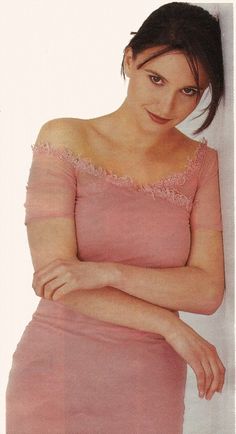 "Hi!  I'm Jayne Middlemiss, and this is The O Zone, from the club capital of Europe, Ibiza!"

"Cut!  Sorry, Jayne, we're still having problems with the sound.  Let's do it from the top..."

Jayne sighed quietly.  She knew she shouldn't complain - how many other people got a free trip to Ibiza as part of their job?  All she had to do was walk across the rocks, with the sea in the background, and deliver a few lines to camera, but it was proving more difficult than anyone had imagined.  The TV crew had experienced all manner of technical problems, and the situation wasn't helped by the fact that the usual gloriously sunny weather had completely failed to materialise.  Instead it was oppressively hot, humid and overcast, and tempers were becoming more than a little frayed.  Returning to her original position, Jayne tried again.

"Hi!  I'm Jayne Middlemiss, and this is The O Zone, from the cab clupital of.... ohh!"  She sank her face into her hands as the words got the better of her tongue.

"Cut!"  The director looked up at the rapidly darkening sky.  "Look, can we try and get this done before the rain comes on?" he asked, sarcastically.

This didn't help Jayne's mood at all.  She was boiling hot, and beginning to wish she had worn something lighter than the calf-length, figure-hugging pink dress which was sticking to her in a most uncomfortable way.  "Alright, alright," she muttered, resuming her position once more.

The director looked on in disbelief as Jayne finally caught her foot in the rock pool she'd been trying to avoid for the past twenty minutes, lost her balance, and disappeared from shot.  "Cut!  Are you alright?"

Jayne pulled herself up from an undignified heap into a sitting position.  "Yeah, I think so," she replied, "I've just got a wet foot."  She took off her black sandal, shook most of the water out of it, put it back on her foot and sighed.  "Shall we try again?"

"Yeah, let's get on," said the director, looking anxiously at the sky.  "We're losing the light, and I'm sure the rain isn't far away..."

Now wearing one wet shoe, Jayne squelched back to her starting point and began again.  "Hi!  I'm Jayne Middlemiss, and this is The O Zone, from..."  She delivered the rest of the line flawlessly, but it was drowned out by the first peel of thunder.  "I don't believe it!"  she groaned.

"Cut!"  A flash of lightning lit up the sky.  "Jayne, we're not going to get this done in time.  Let's take a break and see if it blows over."

As much as she wanted to get the shoot over with, Jayne was glad of the break.  As the crew began to throw plastic covers over the equipment, she began to make her way back across the rocks to the shelter of a nearby bar, where the promise of a cool, refreshing drink awaited her.

She had barely taken two steps when she felt the first drops of rain.  "Great," she thought, "I come all the way to Ibiza and it rains!"  She looked up.  The bar was still a few hundred yards away, and the rain was getting heavier, and beginning to leave dark spots on her light pink dress.  She quickened her pace, but in vain, as the heavens finally opened and deluged her with water.

Jayne squealed.  She hadn't seen a rainstorm like this in a long time!  Her first instinct was to run for shelter, but the rain was making the rocks slippery and she didn't want to fall over again and risk hurting herself.  There was little point anyway, as the rain was already beginning to seep through her dress.  Within a minute, the thick cotton was saturated, and Jayne was literally soaked to the skin.

"I might as well be under the shower," she mused.  As this thought took hold, she began to slow down.  She had been hot and sticky, and would have taken a shower anyway - the fact that she wouldn't have showered fully clothed wasn't really relevant!  With this in mind, she stopped walking and began to enjoy the rain.  It was at exactly the right temperature, not too cold, yet coolly refreshing, and the fact that she still had her clothes on added an element of spontaneity to the proceedings.  Jayne untied her hair and tilted her head back, allowing the rain to run down her long, dark hair and onto her shoulders, where it soaked into the fabric of her dress until it dripped from the hem onto her feet and shoes.

She snapped out of this train of thought as she realised that the director was staring at her.  Jayne looked down at herself and gasped.  She thought her dress had been figure-hugging before, but now that it was drenched, it clung to every curve of her body as if it were painted on.  What's more, although it hadn't gone completely transparent, the outline of her underwear was clearly visible, and the director had obviously noticed!

Self-consciously, she pulled the sodden dress away from her body in an attempt to stop it clinging so tightly.  The director suddenly realised he'd been staring and quickly looked away, but he couldn't help looking back.  "Jayne," he said, "you look fantastic, we have to use this!"

"What?" Jayne screeched.  "Have you gone mad?  You want me to go on television with my clothes soaking wet and my underwear on full display?"

"It's no more revealing than that bikini you were wearing yesterday," the director reasoned, "and it's also much sexier."

"You think so?"  Jayne considered the idea.  She couldn't deny that there was less flesh on show than the scenes she had filmed the previous day in a particularly skimpy bikini.  "Well, I suppose I could, but the rain's stopping now," she pointed out.  "I'm going to look stupid standing here drenched when it's not raining."

"True," agreed the director.  "We'll do it in the sea instead.  Just wade in to about waist level, dip yourself under, count five, then come up to the surface and say the line.  Perfect."

Jayne wasn't quite sure how she had got herself into this situation, but she obediently turned around and walked across the wet sand towards the sea.  As she reached the water's edge, and the waves began to lap around her shoes, she looked back to make sure the director wasn't playing some kind of practical joke, but the crew had set up the cameras and were already filming her.  She turned her head back to the sea, and strode in.

As she waded in up to her knees and beyond, she became aware that the submerged section of her dress was no longer clinging to her, but was in fact floating around her, swaying to and fro with the movement of the sea.  It was a feeling she hadn't experienced before, but the feeling of freedom, combined with the sense of rebelliousness she got from being in the water fully clothed, made her heart pound with excitement.  A huge grin spread across her face as the water swept past her thighs and up to waist level.

Turning round to see a thumbs-up signal from the director, Jayne took a deep breath and submerged herself.  The once clingy dress took on a life of its own as the water took hold of it.  Revelling in the feeling, she counted to five very slowly, smoothed down the front of her dress and stood up.

Water cascaded from the top half of her body as it emerged from the water.  Pushing her soaked hair back out of her eyes, Jayne looked to camera and announced, "Hi!  I'm Jayne Middlemiss, and this is The O Zone, from the cap clubital..... d'oh!  Sorry, I'll do it again..."

Jayne giggled to herself as she sank beneath the water again, wondering just how long she could drag this out without making it look suspicious...