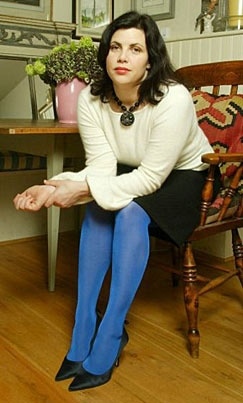 This was the fourth house Kirstie and Phil had visited that day for their TV show and everyone was starting to feel the strain. The couple who were house-hunting had turned their noses up at some minor detail of each property so far, but this one was looking more promising. Until, that is, they reached the final room on their tour: the bathroom.

Everyone's face had fallen as they entered the room. The tiles on the wall were cracked and dirty, the bathroom suite was an appalling green colour and the lino looked as if it had been laid some time in the 19th century. "Oh dear," said Kirstie, understating the thoughts of everyone in the room. "And the rest of the house was in such good condition."

"Well, obviously it needs a bit of work," said Phil, with the charm of an estate agent. He turned his attention to the appalling green bath, and the appalling green shower attachment hovering above it. At least the bath was supposed to be green; the shower attachment had apparently just turned green with mould. "I wonder if this even works," mused Phil, reaching for the lever which would turn on the shower.

There was an expectant hush, punctuated by some worrying clanks and bangs from the plumbing system, before a stream of water finally emerged from the shower head. "Oh well, that's something," Phil relented, carefully reaching behind the wall of water in order to flick the switch back to the "off" position. At that precise moment, Phil's mobile phone rang. He excused himself and left the room to answer it.

The house-hunting couple exchanged uncertain glances with Kirstie. After a few moments' uncomfortable silence, finally the husband spoke up. "So... how easy would it be to replace the shower? Is it something we could do ourselves or would we have to get a plumber in?"

"Well, er..." Kirstie had a look at the shower. "It obviously works and the main unit seems to be okay, you could probably get away with just changing the shower head."

She wasn't entirely certain about this and hoped the couple wouldn't persist with this line of questioning, but persist they did. This time the wife piped up. "Oh, in our last place the shower head wouldn't come off, would it really be that easy?"

Kirstie counted silently to ten and reached up for the shower head, but it was just too high for her to be able to reach. She tried again, this time managing to gently nudge it with her fingertips, causing a few drips of water to spill from the shower head onto the sleeve of her white top. Muttering inwardly, she tried to brush off the spots of water but merely succeeded in wiping them into the material.

Stifling a sigh, she looked up again at the shower head. If Phil hadn't turned it on and made the floor of the bathtub all wet, she would have kicked off her shoes and stepped into the tub in order to reach the offending attachment, but she was wearing tights and didn't relish the idea of getting the soles of her feet wet. She didn't much care for the idea of climbing in with her shoes on either, but she reasoned that if she was quick she could be in and out again long before the water had time to cause any damage to her elegant black satin footwear. Leaning on the edge of the tub to steady herself, she reluctantly stepped in, avoiding the puddles as best she could, and reached up towards the shower head.

The next few seconds seemed to pass in extreme slow motion. As she grabbed the shower attachment, Kirstie's high heeled shoes lost their grip on the wet surface. The attachment freed itself from the wall with surprising ease and Kirstie knew she was falling. That alone was terribly undignified, but then she remembered that she was going to land in the puddles of water on the floor of the tub. Damn you, Phil! In desperation she reached out to grab something that would stop her fall, but the only thing that came to hand was the lever which switched on the shower. Instinctively, she grabbed at it anyway. It did little to stop Kirstie's fall, but it did mean that the puddles of water in the tub became less important than the jet of water which was now heading straight for her. She let go of the shower attachment and put her hands out to break her fall, landing on her bottom with a squeal. The water on the floor of the tub had scarely begun to soak through the thick cotton of her designer skirt when the shower head landed in Kirstie's lap, spraying water everywhere. The house-hunting couple, who had been watching transfixed, now dived for cover as the water sprayed upwards like a fountain, totally drenching Kirstie.

In the meantime, Phil, who was blissfully unaware of what was going on, had been alerted to the crisis by Kirstie's squeal, ended his phone call and now came back into the bathroom. He was greeted by the unexpected sight of Kirstie fully clothed in the bathtub, struggling to her feet and switching off the shower.

Nobody knew quite what to say, least of all Kirstie, who didn't know whether to laugh or cry. Phil took it upon himself to break the silence. "You know, Kirstie, if you wanted to try out the shower you only had to say. I'm sure we would all have left the room and let you undress in peace."

Kirstie scooped up a handful of water from the bottom of the tub and threw it in his direction. "Very funny," she lied. "Look at me, I'm wet through! What am I going to do?"

"Well," said Phil, rather more sensibly this time, "it's getting late in the day. How about this: one of the production assistants can go and get you some dry clothes, the rest of us will go home and you can dry off and get changed and we'll start again tomorrow. Does that sound like a plan?"

With that, the camera crew packed up and everyone left the room, leaving Kirstie alone. With everyone gone, she climbed out of the tub and sat down on the edge. Suddenly she caught sight of herself in the bathroom mirror. She had expected to look like a drowned rat, but in fact she was pleasantly surprised. Her face had escaped the worst of the spray, so her hair and make-up were still pretty much intact. Her white cotton top, once rather baggy and shapeless, now clung to her skin in a mass of folds and wrinkles, hinting at what lay underneath. Kirstie pulled it away from her skin and was amused by the slurping sound it made. The thick black cotton of her skirt had taken on a wonderful shine and hugged her hips quite provocatively. Her blue tights now shone like glass and Kirstie giggled slightly as she wriggled her toes inside her sodden shoes. It was a good thing she looked so good drenched, as the phrase "Here's Kirstie all sopping wet" would be a constant feature of outtake shows for years to come.