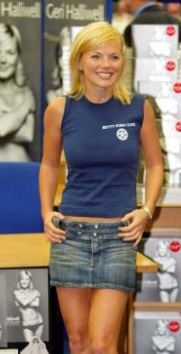 Geri woke up this warm mid-summer morning to get ready to go to the recording studio where she was planning to record some new songs for her new solo album. She changed out of her white nightgown and dressed casually in a dark short sleeve shirt and denim miniskirt, accompanying her look was a pair of black high heels. After having a bowl of cereal she grabbed her black purse and her tan linen jacket, got into her car and drove to the studio.

Halfway into her recordings, a loud thump came from somewhere. She could even hear it through her headphones. The director told her to stand by for a few minutes and he’ll go see what the problem is. A few minutes later the director told her that the thumping sound was the air conditioner down in the basement. It seemed to have broken down. She then resumed her work, as she worked sweat was trickling down her face and back much to her discomfort.

An hour later she was signalled by the director to stop, and they’d give maintenance a call to fix the air conditioner. Seeing as they were also uncomfortable with how warm the studio is. Geri was hoping that maintenance would fix the problem that day, because she was due back tomorrow to record again, she’d rather not be roasting whilst trying to work on her new solo album.

Since there was no point in sticking around the studio she decided to leave. After collecting her coat and her purse from the chair that she placed them on when she came in the door, she stepped briefly into the washroom and splashed some cold water onto her face. The water felt wonderful on her skin, after drying her hands on her coat she took off to her car and headed home.

She was unable to cool off on the car ride home seeing as her car didn’t have air conditioning, so the best thing she could do was to roll down her windows; the cool breeze helped her somewhat. After getting into the house she removed her shoes and poured herself a cool glass of water from the sink. She drank it all down in one sip. She then went into her bedroom and placed her purse and coat in the closet. She then decided to go outside in the backyard, she reasoned that it would a good idea to cool off outside in the shade, so grabbed her shoes from the front door, and she went to sit on one of the lawn chairs outside.

She then glanced at the modest swimming pool that was in her backyard. She then said to herself “I’m still roasting out here, even though I’m sitting in the shade. A swim would be a wonderful idea to cool off here.” She immediately said to herself “Should I grab a one piece, or a two piece swimsuit for swimming?”

Suddenly she glanced down at her dark short sleeve shirt and denim miniskirt, and the high heels, she then had the idea of going for a clothed swim. This idea came into her head because her friend and fellow Spice Girl Mel C decided to go for a clothed swim in her pool at her brand new house, and then she pulled Mel B in to the pool with her. Emma soon joined in and the three of them convinced a reluctant Victoria to join them after splashing some water in direction (as shown in Four Become Wet). This was after Geri had left the group, so she missed the invite to Mel’s new house, and therefore missed out of the fun of going for a clothed swim with her friends.

She chose to leave her shoes on, since her friends left their shoes on in Mel’s pool, she thought she should do the same for her pool. She walked over to the diving board and jumped in.

The water felt rather refreshing as she began to surface, she then slicked back her wet blonde hair and started swimming. She then did some flips and such underwater. As she was swimming she thought to herself “This is rather enjoyable. I could see why my friends liked it.” She then switched things up a bit doing some laps in the pool. After a couple of laps she decided to call it quits for the day.

She then swam over to a ladder and climbed out of the pool. Her wet blonde hair was stuck to her head, she then glanced down at her soaked shirt and skirt. Her skirt seemed darker out of the water, and her shirt seemed to grip onto her soaked body. She thought to herself, “Here’s Doused Spice.” As she went into the house with her soaked clothes clinging to her body she said to herself “I should do this again some night.”